Standing up for her rights

The 60th session of the Commission on the Status of Women is taking place at the United Nations Headquarters in New York from 14-24 March. It is an opportunity to review progress towards gender equality and the empowerment of women. The review theme is the elimination and prevention of all forms of violence against women and girls.

There are 1.7 million women living with HIV in Asia and the Pacific and gender-based violence is one of the contributors to HIV vulnerability.

Sita Shahi is a woman living with HIV from Nepal, who has recently moved to Bangkok to take up her new position as the Regional Coordinator for the International Community of Women living with HIV in Asia and the Pacific (ICW). Sita spoke to UNAIDS about her own journey from fear and despair to hope and self-empowerment.

END_OF_DOCUMENT_TOKEN_TO_BE_REPLACED

“I fell into sex work,” said “Soi” Phathranis Meekrua. “I was a hair stylist and many of my clients were sex workers. One day they invited me to come along and visit them in the street. I was approached by a customer and thought why not have sex.”

END_OF_DOCUMENT_TOKEN_TO_BE_REPLACED

For Sakaodeuan Somkate the day she learnt about her status is as fresh as ever. “I remember it was raining. I was told my test result was positve, I couldn’t believe it was me. I kept crying and crying.”

END_OF_DOCUMENT_TOKEN_TO_BE_REPLACED

Renato Nocos is a hair stylist from the Philippines and he has a message for employers, “The best way to treat people living with HIV is with respect. Educate yourself about HIV and show your support.”

END_OF_DOCUMENT_TOKEN_TO_BE_REPLACED

Chloe Reynaldo is a new generation of leadership 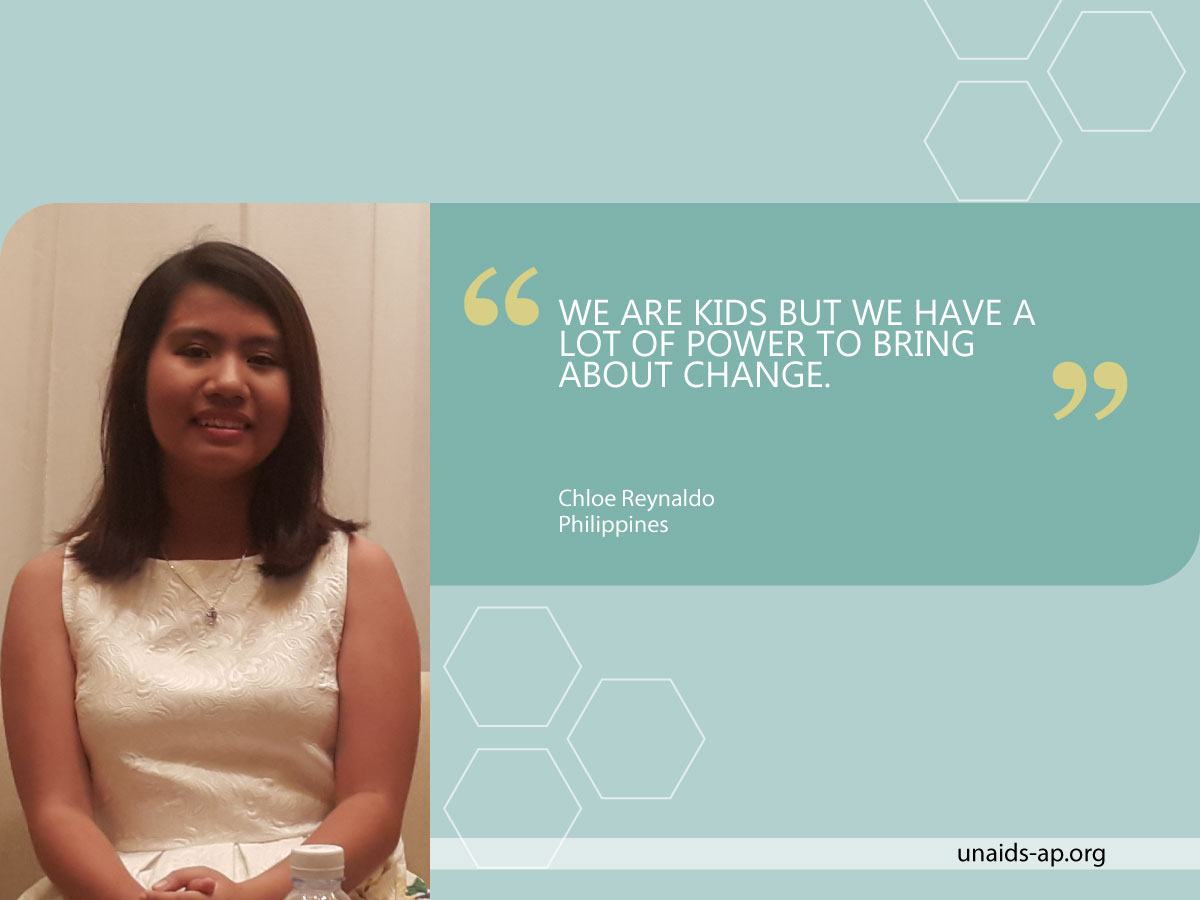 Chloe S. Reynaldo is now 17 years-old. Since she was 15 years-old the honour student from the Philippines has been using her talent for public speaking to inform her peers about adolescent sexual and reproductive health.

Among the topics that she discusses while speaking at various high schools in Aklan province are sexually transmitted infections, HIV and other issues relating to young people. She considers that her advocacy is not limited to high-school students but includes their families as well. Chloe was one of five panelists who participated in the Asia-Pacific launch of the State of the World Population Report 2015 by the United Nations Population Fund (UNFPA) which took place in Bangkok.

UNAIDS interviewed her about what it’s like being a young peer-educator, where often the people she talks to are older than her.

(The views and opinions expressed in interviews or commentaries are those of the interviewees and contributors and do not necessarily reflect the official policy or position of UNAIDS).

END_OF_DOCUMENT_TOKEN_TO_BE_REPLACED

Public health leaders and key stakeholders from around the world have come together at the Prince Mahidol Award Conference  to discuss how limited health resources can be used in the most cost-effective way to provide high-quality health care.

END_OF_DOCUMENT_TOKEN_TO_BE_REPLACED

Transgender women take health into their own hands

The sun is starting to dip low over the horizon as Prayune Sawangnam (Prayune) steps into the brightly decorated offices of the Sisters Foundation. The non-profit organization provides health, education and support services to the transgender community in Pattaya, a beach town located a two-hour drive from Bangkok. Ms Prayune with her neat bun and long flowing dress presents a commanding figure and is treated respectfully by the dozen other transgender women gathered at Sisters.