The Prime Minister of Cambodia, Hun Sen, has committed to stopping new HIV infections by 2020 and ensuring the sustainability of its HIV response. This comes as Cambodia allocates US$ 3.7 million of national funding to HIV treatment from 2015 to 2017. This is the first time that the government has earmarked funds for its treatment programme, which, owing to the large numbers of people receiving antiretroviral medicines, is where resources are most needed.

The Prime Minister reaffirmed the national commitment to HIV, tuberculosis and malaria programmes during his meeting with the UNAIDS Director of the Regional Support Team for Asia and the Pacific, Steve Kraus, in Phnom Penh, Cambodia. The Prime Minister said “the government will not allow any successful programme to go bankrupt.” He further stressed that “the key to the nation’s success against HIV is a concerted effort by everyone, especially people infected and affected by HIV.”

The country’s progress in its AIDS response has already been internationally recognized. New HIV infections have dropped by 67%, from 3500 in 2005 to 1300 in 2013. More than two thirds of the 75 000 people living with HIV receive antiretroviral therapy, the highest percentage of treatment access in the region. Nearly 80% of mothers living with HIV have received treatment preventing HIV transmission to their children. However, challenges remain. There are high rates of HIV infection among key populations at higher risk of HIV, including men who have sex with men, people who inject drugs, transgender people and entertainment workers. Gaps in access to HIV services persist. 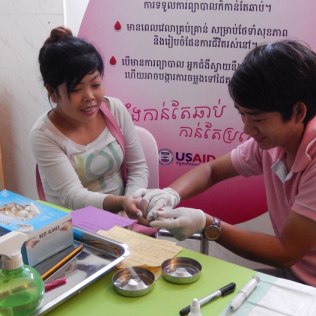 During his meeting with the Prime Minister, Mr Kraus congratulated Cambodia for its remarkable progress and continued strong national leadership. He noted in particular that strategic and well-managed domestic and external investment will further transform the AIDS response.

Cambodia is optimizing available resources by implementing more focused and efficient approaches for HIV prevention, treatment and care, particularly for key populations. More than 24 000 people in key populations used community-led fingerprick testing to learn their HIV status during the year to October 2014. People who test HIV-positive are accompanied by peers and counsellors to clinics to receive HIV treatment. Harm reduction services, including needle and syringe programmes, are also being expanded.

During his visit, Mr Kraus visited the Smartgirl programme, which empowers entertainment workers to know their sexual and reproductive health and rights and offers integrated access to family planning and HIV counselling and testing. Mea Sopheap of Cambodian Women for Peace and Development, which is implementing the Smartgirl programme, said, “we are proud to be part of the solution and work closely with the community, the local authorities and entertainment places.”

Recently the country adopted a landmark ministerial regulation to improve occupational safety and health and working conditions at entertainment places. The policy is the first of its kind in the Asia–Pacific region and reinforces labour rights for entertainment workers, including protection from sexual harassment and access to health services. This is one example of how Cambodia is using HIV programmes to find solutions to other health and human rights issues, an example that could be a model for the region, according to Mr Kraus.