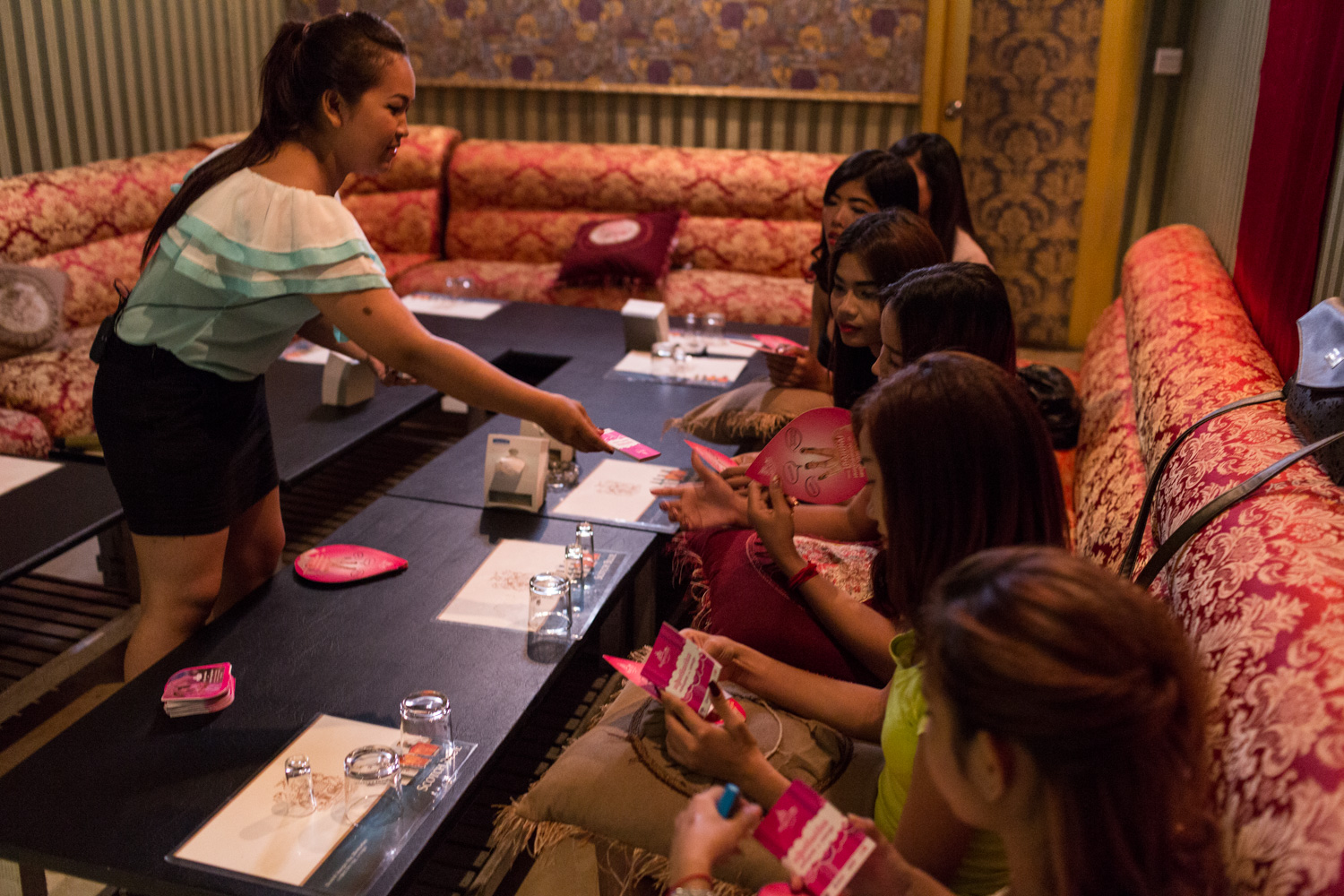 It’s 9pm and the night is just getting going in one popular entertainment establishment in Phnom Penh city. The place which preferred not be identified provides a mix of services in its multi-story building: diners enjoy a restaurant on the ground floor, the rooms in the middle level vibrate with popular songs and on the top floor is the hotel. However in one corner next to several other karaoke rooms, a serious conversation is taking place. It seems out of context amid the high pitched laughter, strobe lights, brightly dressed women and loud male customers.  Five entertainment workers are sitting on a sofa talking about why they don’t get tested for HIV.

A co-worker agreed and added, “I dare not go. I am too afraid.”

Their interviewer is 22-year-old Rath Chan Molika. She recently quit her job as an entertainment worker and is now an outreach worker and lay counsellor with the SMARTgirl programme. She explained further why the women working in the karaoke parlour feared public health clinics, “First of all it’s because they’re scared to go alone. Secondly, they’re afraid of the needle and blood.”

There were an estimated 34 000 entertainment workers in Cambodia in 2014, working in a range of places including hotels, karaoke parlours, beer gardens, casinos and massage parlours. Unprotected sexual relations with male customers can place some women at higher risk of HIV.

“Some go out with customers without using a condom correctly and consistently. And they sometimes also use drugs together, sharing needles and syringes, which increases their risk of HIV,” said Ms Molika. As part of her job with the SMARTgirl programme, she informs entertainment workers about health, sexually transmitted diseases including HIV and contraceptive methods.  While HIV peer counselling in entertainment establishments has been conducted for a few years, Ms Molika is participating in a highly innovative HIV testing programme.

When the group counselling session ends, she breaks away and in a separate room welcomes Mao Soma. The two women talk quietly with a tray full of cotton swabs, vials and bandages laid out on the table before them. Ms Molika has been trained to provide pre and post HIV test counselling and to conduct a rapid finger prick test. While Mao Soma winces as the needle pricks her finger, the procedure is over before long. Within fifteen minutes there is a result and this suits Ms Soma. “The test is quick and I can get the result immediately and then get back to work.”

As in many other countries in the region, Cambodia’s AIDS epidemic is concentrated in key populations at higher risk of HIV, which includes entertainment workers, men who have sex with men, transgender people and people who inject drugs. Despite efforts to scale up HIV testing, latest available data from Cambodian health authorities found significant numbers of key populations have not had an HIV test (32% of entertainment workers, 14% of men who have sex with men and 85% of people who inject drugs).

Ieng Mouly, Senior Minister in Charge of Special Mission and Chair of the National AIDS Authority said, “ The government of Cambodia gives importance to the collaboration with civil society and also with local people at the community level.”

The government and their civil society partners along with international organizations decided to promote HIV testing among key populations, using a recent technological innovation. Traditionally, tests have been conducted by drawing blood with a needle and syringe and having a laboratory analyze the samples. In 2013 the Ministry of Health approved a second method for detecting HIV, which uses a rapid HIV finger prick. These tests are easy to administer and in April of 2013,  the community-based testing programme started up

Dr Ly Penh Sun, Director of NCHADS said, “Bringing the facility close to the people is always the best. People don’t have to use sophisticated laboratory equipment.”

Since the programme began nearly 700 lay counsellors have gone through a 5-day training in how to provide voluntary HIV counselling and testing.

“The people who are conducting the tests are familiar with the people they are testing. They can interact more. They can support each other” said Choub Sok Chamreun, Chief of Party, KHANA.

Innovative HIV-testing programme is a first

This community-based HIV testing programme is one of the first of its kind in Asia and the Pacific. Across the region HIV testing coverage among key populations is low with only about a third knowing their HIV status in 2013. While many countries have scaled up HIV testing in health clinics, civil society representatives have called for more community friendly approaches, focusing on key populations who often do not attend health clinics.

The results from the Cambodian model are encouraging. In 2014, implementers reported around 20 000 people from key groups were tested, which was double the number tested in 2012. If a person has a positive result on a first rapid test, they are accompanied by outreach workers to health facilities for confirmatory tests. Once a medical professional confirms the result, the person is provided with HIV treatment for free.

While this peer-provided HIV counselling and testing has increased the number of people tested from key populations, it has not detected a significant number of new HIV cases. In 2014, there were only about 150 confirmed cases. To improve their efforts to find more people living with HIV, implementation partners are starting to retool the programme to intensify outreach to people at the highest risk within each key population, using geographical hotspot mapping information.

Dr Ly Penh Sun said, “The plan is to modify the outreach guidelines to the population at highest risk and intensify targeted outreach activity as well as active case management to register and retain the people who were found to be HIV positive, to ensure they receive treatment.”

At a meeting of AIDS Managers in Manila, Philippines in early July, organized by the World Health Organization’s Regional Office for the Western Pacific, the Cambodian peer to peer testing model will be presented. Participants will discuss how to scale up HIV testing through community based testing.

Note:  The National Center for HIV/AIDS, Dermatology and STIs (NCHADS) started the the peer to peer HIV testing  programme in April 2013. Implementation is led by the Flagship Consortium Partners (KHANA, Family Health International 360  (FHI 360) and Population Services Khmer (PSK/PSI)  with direct implementation by the Cambodian Women for Peace and Development (CWPD), Men’s Health Social Services (MHSS) and Men’s Health Cambodia (MCH) with support from the US Government and the United Nations Population Fund (UNFPA).

The MStyle programme in Cambodia caters to the needs of men who have sex with men (MSM). A coffee shop, lounge area with internet access creates a friendly environment for MSM. Outreach workers conduct HIV awareness programmes, as well as pre and post HIV counselling and rapid finger prick testing.