Opinion: What the new “O” passport category means to transgender people in Nepal 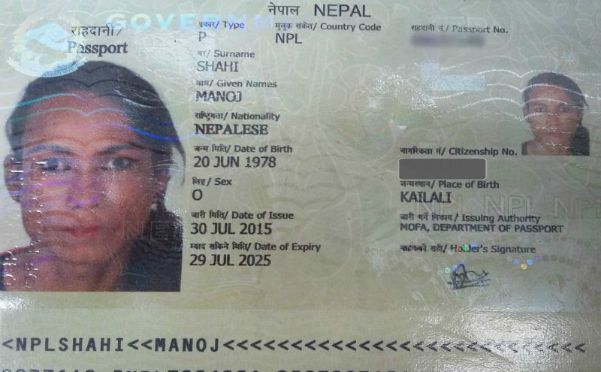 This week the Nepal government presented its first “O” passport to a transgender woman. Manisha Dhakal, the acting Executive Director of the Blue Diamond Society writes about what this landmark move means to her and other transgender people.

On 10 August, Monica Shahi became the first person in Nepal to be issued a passport marked with “O” for “other” rather than “M” for “male” (or “F” for “female”). Monica is a 37 year-old meti (transgender person) who lives in the far western region of Nepal. For her personally, and for transgender people across Nepal, this is another step in our struggle for human rights. Monica is proud to hold an “O” passport and thankful that the Nepal government has officially recognized her gender identity.

As activists in Nepal, we welcome the leadership our government has taken. We are proud to be one of the few counties in the world that recognize the rights of those who identity their gender as other than male or female.  We also acknowledge the many transgender people around the world, including in this region, who wish to be able to choose to be legally recognized as third gender or as male or female.  As the 2014 Indian Supreme Court stated, all transgender people have the “right to decide their self-identified gender … such as male, female or a third gender”. In our community, where many transgender people identify as a third gender, an “O” passport will make a huge difference.

Being able to get an “O” passport means a lot to people individually and to our community. However the importance of official identification documents goes beyond just having a piece of paper affirming our identity. It comes back to the legal protection and rights that this recognition provides. Our highest priority is making sure that transgender people and others who hold an “O” passport are able to legally marry and that lesbian, gay, bisexual, transgender and intersex rights will be protected in Nepal’s new constitution.

The Committee considering same-sex marriage has already submitted its report to the Government of Nepal and has made a recommendation in favour of marriage equality. It is important that this right is available to everyone in Nepal, whatever our sex or gender identity.

Current debates about the constitution and new Penal Code are vital opportunities to ensure further progress in advancing human rights for all members of our communities. The Nepal government has included references in the draft constitution to the right to equality for sexual and gender minorities. This protection from discrimination is strongly welcomed by our communities. It is also important that the new Penal Code makes it clear that all sexual and gender minorities have legal protection if they are raped.

The recognition of a third gender category on citizenship certificates and passports must be supported by measures that legally protect those who identify as a third gender. As the Acting Executive Director of the Blue Diamond Society, I call on Nepal government to start discussions with other governments, at the diplomatic level, to ensure the safety of Nepali citizens who travel on an “O’ passport.