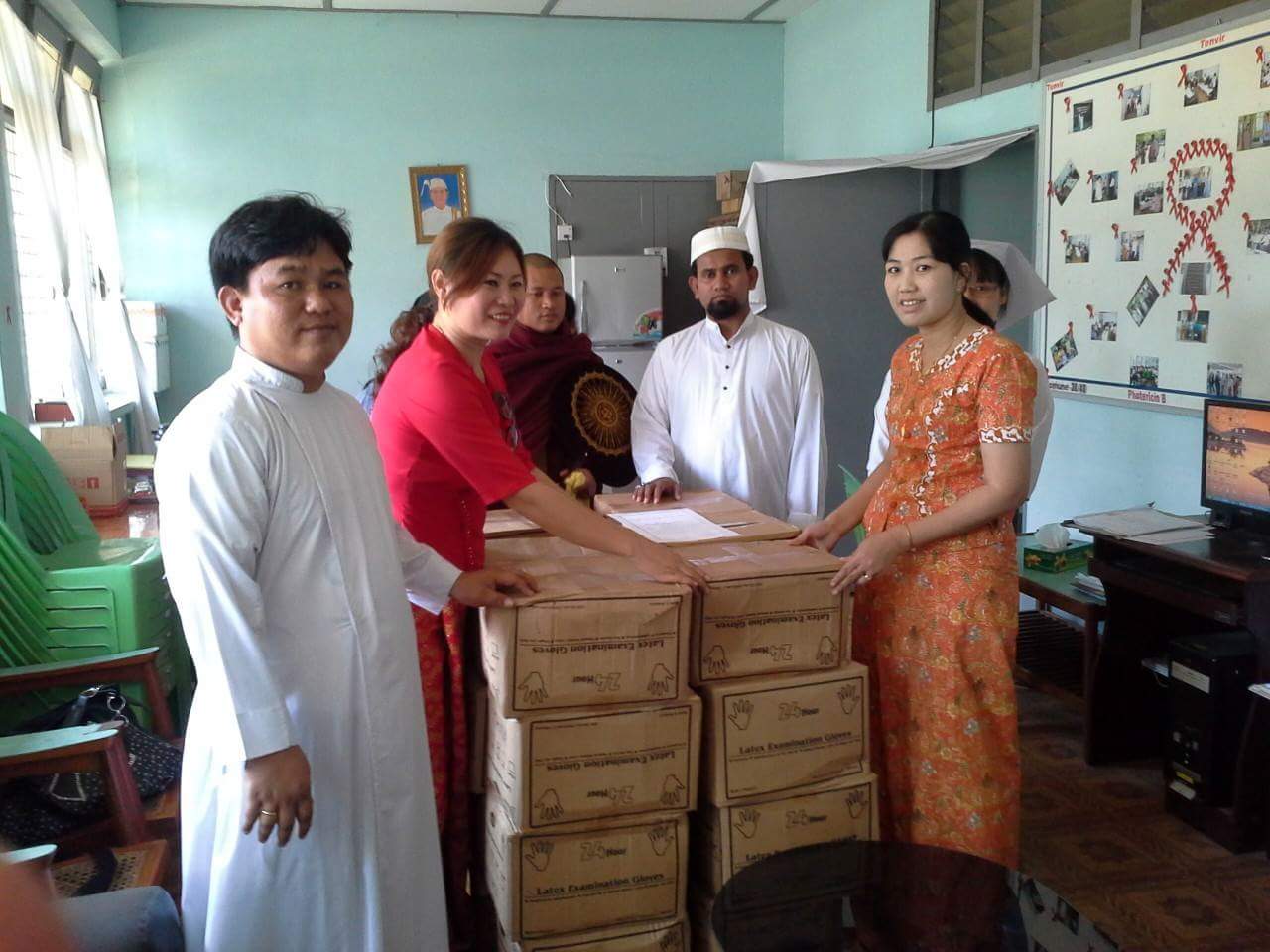 Su Su likes to run around trailing a kite in her hand. The 13-year old girl, whose face is smeared with Myanmar’s trademark thanakha powder often plays with the young Buddhist female novices, who live like her in Yaelae Taik Thit monastery, which is located opposite Waibargi Hospital in North Okkalapa Township, Yangon.

When Su Su was three years old, both her parents died of AIDS-related causes while they were living and working in Thailand. The young girl is also HIV positive and her relatives brought her to the monastery about two years ago.

“When her aunts brought her here, we accepted to take care of her and have been giving her medical treatment. Her elder sister is not HIV positive, so unfortunately, we could not accept her. The sister is now staying with her aunts,” said Venerable Sayadaw U Argawuntha, a monk from the monastery.

Yaelae Taik Thit is a welcoming and supportive oasis for people living with HIV from all religions and ethnicities – many people travel long distances to access medical treatment at the neighborouing Waibargi Hospital. Every day the monastery provides lodging for about 20 people living with HIV. It is part of the Myanmar Interfaith Network on AIDS (MINA), which includes members from the four main religions of Myanmar – Buddism, Hinduism, Islam and Christianity.

“It is our organization’s mission and responsibility to foster closer collaboration, mutual respect, and understanding between religions, explained Ma Khun Taung, from MINA.

Ma Kyi Kyi Linn is a Hindu who is HIV positive and she stressed that religion has helped her overcome the mental and physical hardships she struggled with since she started living with HIV. She said, “I was born in a rural area, but I got married in Yangon to a man chosen by my parents. In 2007. I realized that my husband had transmitted HIV to me. From then on, I considered myself a dead woman. I gave away nearly all of my belongings, and even my clothes. I kept thinking that I would die soon.”

But Ma Kyi Kyi Linn regained hope and strength after joining an organization partnering with MINA, in support of people living with HIV. For many people in Myanmar, religion plays an important role in their lives.

“From cradle to death, each life step is associated with religious rituals and traditions. With religion playing such a central role, it means religious groups have important responsibilities, including protecting and sharing knowledge with people,” said Ma Kyi Kyi Linn.

MINA provides a wide range of services, including HIV counseling, treatment and care and has set up an exchange programme between people receiving treatment and religious leaders.

“The benefits are obvious: religious leaders come in person to encourage and pray with and for the people living with HIV, who need not only timely and appropriate treatment, but also spiritual support and understanding. Loneliness often leads to a growing sense of abandonment and despair. These visits help people living with HIV regain hope and faith in their future,” said Ma Kyi Kyi Linn.

“MINA is grounded in the shared values of religions, rather than in their differences,” said Ko Kyaw Nyein from the Positive Muslim Group – a member of MINA.

“A common feature of all four religions in Myanmar is the nobility of heart and the importance of helping people. HIV is impartial and does not discriminate between people, depending on their religion or origin. Anyone can contract the virus,” he added.

For MINA members, religious festivals are joyous occasions for interfaith unity. Each religion takes turns to celebrate feast days in different places of worship. “Holding a feast day in the religious edifice of another religion helps promote closer relations and mutual understanding among people of all religions and origins,” said  Ma Khun Taung.

MINA was founded in 2009 and while promoting collaboration between religions has challenges, the main difficulty the organization faces today is raising funds.

“Ninety percent of donors who are financially supporting HIV programmes do not pay sufficient attention to faith-based organizations such as MINA,” said  Ma Khun Taung.

Despite its small budget of about $US 33 000, MINA operates through partners in six regions across Myanmar.

For girls like Su Su the organization is providing her with opportunities she would have found difficult to have without its support. She likes to study with the young novices and the monastery is already looking to her future beyond their walls. The monks are speaking with vocational training programmes about a possible career for Su Su.

The names of minors and people living with HIV, as well as identifying details have been changed to protect the privacy of individuals

Like Loading...
← Capturing LGBT pride in Asia
Daina, a transgender student learns tough lessons from the school of life →