For Sakaodeuan Somkate the day she learnt about her status is as fresh as ever. “I remember it was raining. I was told my test result was positve, I couldn’t believe it was me. I kept crying and crying.”

At the time, Ms Somkate was working in Bangkok, but she decided to return to her family who lived in a rural community in Chiang Dao, northern Thailand. That was more than 10 years ago.

Ms Somkate is now one of about 400 people registered with the Chiang Dao Hospital’s HIV programme. She is also an HIV peer educator.

“I decided to go from being a client to a service provider because I didn’t want other people living with HIV to feel excluded and avoid HIV services because of the way they were treated,” said Ms. Somkate.

While, she has seen improvements, she finds out-dated attitudes and behaviours remain in health facilities. “When a person living with HIV comes in, they will be put in a separate room.”

Her fellow HIV peer educator, Kanda Singchaichid agrees that hospital staff seem to pick on people living with HIV. “My friend did not get the assistance she needed but was blamed for getting pregnant again and again,” said Ms Singchaichid.

Thailand has been held up as a global example for how a country can respond to the AIDS epidemic. In the early days of the epidemic, the country introduced the 100 percent Condom Use Programme, which has been widely replicated. In 2014, the country became one of the first countries in Asia to offer free treatment to al people living with HIV. This approach has helped new HIV infections to fall dramatically from more than 140 000 in 1990 to 7 800 in 2014.

However, AIDS-related deaths remain persistently high at around 20 000 per year. Health authorities recognized that HIV-related stigma continues to prevent people from accessing the services they need.

Dr Sophon Mekthon, Permanent Secretary, Ministry of Public Health said, “Stigma is a root cause, a key driver and if we could manage this, I believe that ending the AIDs epidemic would be easy.”

The Thai Ministry of Public Health with support from civil society, the United States Agency for International Development and UNAIDS agreed to tackle stigma with a comprehensive system-wide programme. To tailor the initiative to the Thai context, a survey was conducted with more than 1 600 health care workers in eight provinces.

The preliminary results were eye-opening. Over half of the health workers declared taking unwarranted “precautions” when people living with HIV were in their care. More than 60% feared an HIV infection while performing routine tasks and 90% admitted to at least one stigmatizing attitude.

This research became the basis for developing a stigma-reduction programme.

“What’s great is instead of hiding the results or denying them, the Ministry of Public Health has embraced them and said let’s use this information to make good health care workers even better,” said Steve Kraus, Director of UNAIDS Regional Support Team for Asia and the Pacific.

The Chiang Dao Hospital agreed to pilot-test the programme in October of last year. The hospital’s director, Dr. Kochaporn Inthawong said, “We believed that the training would help strengthen our services and promote access to services for our clients as they would not feel stigmatized.” Kwandao Inta is a pharmacist who participated in the stigma-reduction training at Chiang Dao Hospital.

About 30 hospital staff, including doctors, nurses, pharmacists, as well as HIV peer educators received 12 hours of training over a three day period. With presentations, interactive exercises,  group discussions and reflections, the workshop aimed to get participants to recognize that stigma is a problem and then to talk about how as a group they could change and make improvements in the hospital.

Right after the workshop , Kwandao Inta, a pharmacist said, “I now realize I stigmatized patients. I want all hospitals to organize this training, which should also last longer as it’s very useful.”

Thunyarat Thongkham, Head of the labour room unit found her attitudes started to change, as she realized the impact of discrimination on clients.

Three months after the training, the impact is visible. The labour room unit has reversed a decades old policy of assigning a particular bed in the delivery room for women living with HIV.

Nurse Thongkham said, “Now my clients can use any bed.” 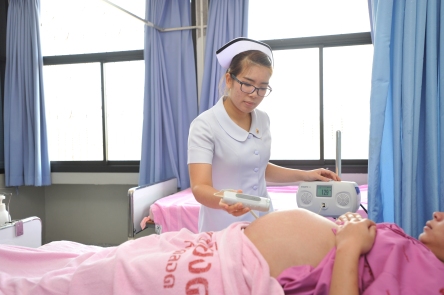 And Ms Inta finds she is more understanding. “I used to be aggressive, but now I am more supportive.”

For Ms Somkate the transformation has been remarkable. “After the training, staff stopped blaming pregnant women with harsh words and became supportive, asking questions to try to better understand their pregnancies.”

Earlier this week, the Ministry of Public Health announced plans to expand the programme to hospitals in four provinces at an event in Bangkok, marking 1 March Zero Discrimination Day. This is the first time an HIV-related stigma reduction programme for health-care workers has been integrated on a wide scale in a public health system.Other countries in the region such as Lao PDR are considering adapting the programme to their health systems.