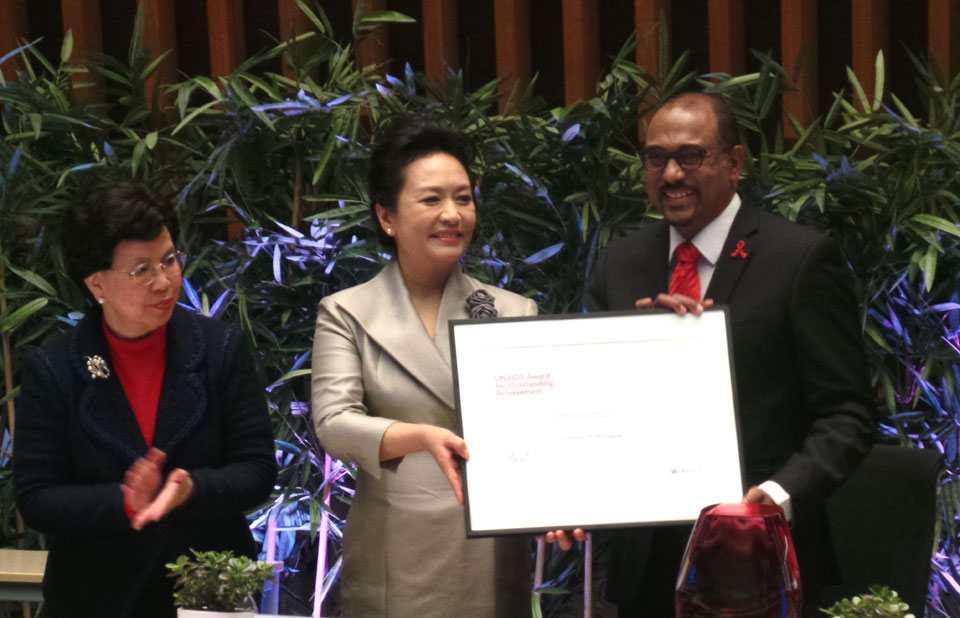 GENEVA, 18 January 2017—UNAIDS has presented Professor Peng Liyuan, the First Lady of China, with the UNAIDS Award for Outstanding Achievement in recognition of her remarkable contribution to the global response to HIV. The award was presented to Professor Peng by the Executive Director of UNAIDS, Michel Sidibé, at a special ceremony held in her honour organized by UNAIDS and the World Health Organization (WHO) in Geneva, Switzerland.

A renowned soprano singer, Professor Peng has been working on HIV and tuberculosis for more than 10 years and has advocated for a stronger response to the two diseases at major international events, including at meetings of the Group of Twenty and the United Nations General Assembly.

“This is a great honour and I am deeply humbled,” said Professor Peng on accepting the award. “A caring heart is our best weapon against AIDS—we can save lives if we take action. We must succeed and we will succeed.”

Professor Peng’s work to break down the barriers of stigma and discrimination is allowing more people to be reached with essential HIV services. Through her work with children and young people, in particular children orphaned by AIDS, she has enabled a broader understanding of how to support children living with HIV to live a healthy life with dignity and free from discrimination.

“Professor Peng has helped to open a national conversation around HIV in China that has spread empathy and compassion for people affected by HIV,” said Mr Sidibé. “She is a true champion for the most vulnerable, especially children affected by HIV, and has helped to create an environment for children to not just survive, but thrive.”

The work of Professor Peng and other prominent advocates has made an important contribution to the scale-up and improvement of services to prevent mother-to-child transmission of HIV around the world. These efforts have helped to more than halve the annual number of new HIV infections among children globally since 2010.

However, to reach the target countries committed to in the 2016 Political Declaration on Ending AIDS, the number of children accessing antiretroviral therapy needs to increase significantly, to 1.6 million children by 2018. “The world has made significant gains, but there is still much more to do and we need people like Professor Peng to continue speaking out and leading the way towards ending AIDS and tuberculosis,” said Mr Sidibé.

In 2015, Professor Peng collaborated with the Organisation of African First Ladies against HIV/AIDS in Johannesburg, South Africa, speaking out on key issues critical to ending AIDS by 2030. In 2011, Professor Peng was designated as a Goodwill Ambassador for Tuberculosis and HIV/AIDS by WHO. Her ambassadorship was renewed for a further term by WHO during the special ceremony.

The Joint United Nations Programme on HIV/AIDS (UNAIDS) leads and inspires the world to achieve its shared vision of zero new HIV infections, zero discrimination and zero AIDS-related deaths. UNAIDS unites the efforts of 11 UN organizations—UNHCR, UNICEF, WFP, UNDP, UNFPA, UNODC, UN Women, ILO, UNESCO, WHO and the World Bank—and works closely with global and national partners towards ending the AIDS epidemic by 2030 as part of the Sustainable Development Goals. Learn more at unaids.org and connect with us on Facebook, Twitter, Instagram and YouTube.