The Executive Director of UNAIDS, Michel Sidibé presented the Deputy Governor of Yunnan Province, Gao Feng with UNAIDS’  global “Leaders and Innovators Award” in a ceremony at the UNAIDS office in Beijing, China on 17 August. Mr Gao has been leading HIV prevention and control efforts in Yunnan province, one of the areas most affected by the AIDS epidemic and the award honours his exceptional work on HIV. 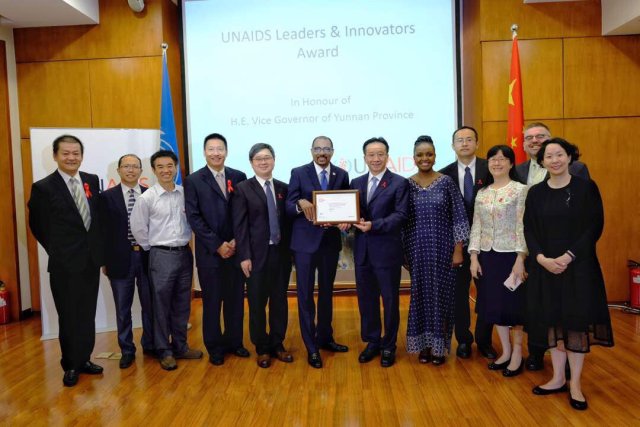 Located in southwestern China, Yunnan Province borders Myanmar, Lao PDR and Vietnam and has been heavily impacted by drug trafficking. By the end of 2016, more than 92-thousand people were diagnosed and reported as living with HIV, which represents 14% of all cases in China.

Mr Gao has driven change that has not only transformed the face of the AIDS epidemic in Yunnan but has made the province a model for HIV prevention and control in China and beyond. Between 2005 and 2016, Yunnan reduced new HIV infections by 36, 600 and AIDS-related deaths by 24 100 people.

“I am committed to fighting against AIDS until the last day of my life.”

“What I saw in Yunnan is unique.  They combine exactly what we need in global health: political leadership, commitment at the technical level, partnership with local authorities and a clear strategy to involve communities.  They are bringing services closer to people. This is how we will control and ultimately end AIDS.”

Like Loading...
← Grassroots hero: thinking out of the box by mixing health and fun
China’s Belt and Road Initiative to Play a Key Role in Overcoming Global Health Challenges →