Catch up on lesbian, gay, bisexual, transgender and intersex news and issues around Asia and the Pacific in this latest edition of Equal Eyes.

HIV, Health, and Wellness: In Indonesia, a crackdown on gay and transgender individuals has forced some NGOs to shut down HIV awareness campaigns and mobile testing clinics in fear that the groups will be targeted by officials.

The Philippines Department of Health approved a new trial to bring PrEP to more trans women, gay, bisexual, and other men who have sex with men. This past May the Department recorded the highest ever monthly figure of new HIV cases since the country began recording in 1984.

From the World of Politics:  The Parliament of Pakistan is reviewing its first ever bill to protect the rights of transgender persons noting that, “transgender persons constitute one of the most marginalized and disadvantaged communities in the country”. Meanwhile, the General Assembly of Uruguay is considering several bills to support trans citizens, including a pension fund that will pay those born before 1975 to compensate for mistreatment.

The South Korean government announced that it is reviewing laws that punish soldiers for homosexual activity in response to UN recommendations on the rights of gay soldiers. Although gay male Koreans must fulfill the country’s two-year mandatory army requirement, the Military Criminal Act currently punishes homosexual activity with up to two years in prison.

The Politics of Union:  Australia’s Liberal-National Coalition voted against holding a Parliamentary vote on marriage equality despite pressure from many MPs and advocates to avoid a public vote, estimated to cost $122 million AUD. The vote will be conducted through a mail-in ballot.

Australian journalist Creatrix Tiara spoke to activists and LGBTQ organizations from across the Asian continent to gauge how the ruling by Taiwan’s Judicial Yuan in May to legalize marriage equality will or will not impact LGBT rights in other countries.

In South Korea, a coalition of around 300 organizations has formed to object to same-sex marriage and the possibility of constitutional equal rights regardless of sexual orientation. Although gay marriage is not currently permitted in South Korea, coalition members worry that ongoing National Assembly revisions to the constitution could revise gender-related language and bring “confusion” to Korean society.

For the first time in Nepal, a third gender person has been allowed to register for marriage to their husband. Nepal has no legal protections for same-sex or transgender marriages.

The Philippines Department of Health has called on parents to talk to their children about HIV.  Health Secretary Paulyn Jean Ubial urged parents to take children to nearby health facilities if they feel uncomfortable discussing sexuality themselves.

In India, organizers of Queer Pride Keralam used the event to bring attention to issues of bullying, marginalization, and school dropouts—noting that “Almost 68% of the sexual minority individuals in the State are school dropouts.”

And from Indonesia, activists warn that young LGBT people are increasingly isolated, routinely bullied by peers, and afraid of being disowned by their parents. King Oey, leader of the Indonesia’s largest LGBTI rights group, says that the government crackdown on the community hinders support groups from reaching at risk youth. 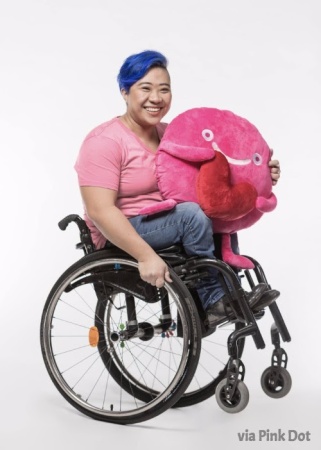 Rui Si Theresa Goh of Singapore, a self-described “a queer, disabled, paralympic medalist athlete”, discussed the challenges of coming out and her desire to support a more inclusive society. Goh won a bronze medal for swimming at the Rio Paralympics.