In the week leading up to the International Day against Homophobia and Transphobia (IDAHOT), a teams of volunteers led by representatives of UNAIDS, UNESCO, Youth Voices Count, Youth LEAD and APCOM chalked rainbows across school yards around Bangkok, Thailand. Called #schoolrainbow, the initiative aimed to bringing awareness to the problem of bullying, particularly towards lesbian, gay, bisexual, transgender and intersex (LGBTI) students, at schools in Thailand and around the world. Such bullying can lead to a higher risk of illegal drug use, unprotected sex, HIV, self-harm and suicide.

Volunteers arrived as dawn broke around 6am and included members of the LGBT community, students and teachers of the school itself, friends and organizers.

Teachers and students arrived at NIST International School on 15 May to find a #schoolrainbow in progress in the main square. What else to do but join in? Hundreds of hands made light work and lots of fun too. 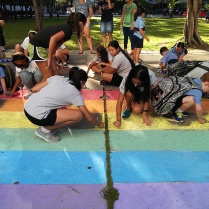 Each #schoolrainbow chalking was different and influenced by its environment and surface, from the strong straight lines at Thammasat University, to the gently curving rainbow around the school track at NIST and the oyster-shaped rainbow that followed the paving at Mathayom Prachaniwet school (pictured). 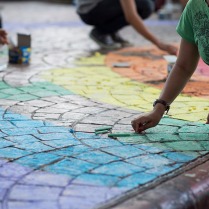 Chalked right next to the main school gate, students arriving at Mathayom Prachaniwet school on 16 May couldn’t miss our #schoolrainbow. Whilst some stood curiously watching, others joined in.

Over 2000 students at Wat Nuannoradit school stood in front of our #schoolrainbow for morning assembly on the first day back to school on 16 May. They listened intently as the Deputy Head Teacher spoke of tolerance and we told them more about School Rainbow’s anti-bullying campaign. 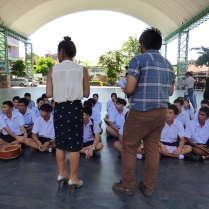 The #schoolrainbow team worked with each of the schools to follow up each chalking with classroom discussions on bullying and the rights of LGBT students to a safe education.

The International Day Against Homophobia and Transphobia may be over for another year but #schoolrainbow will continue to raise awareness of bullying of LGBT students in Thailand and elsewhere.