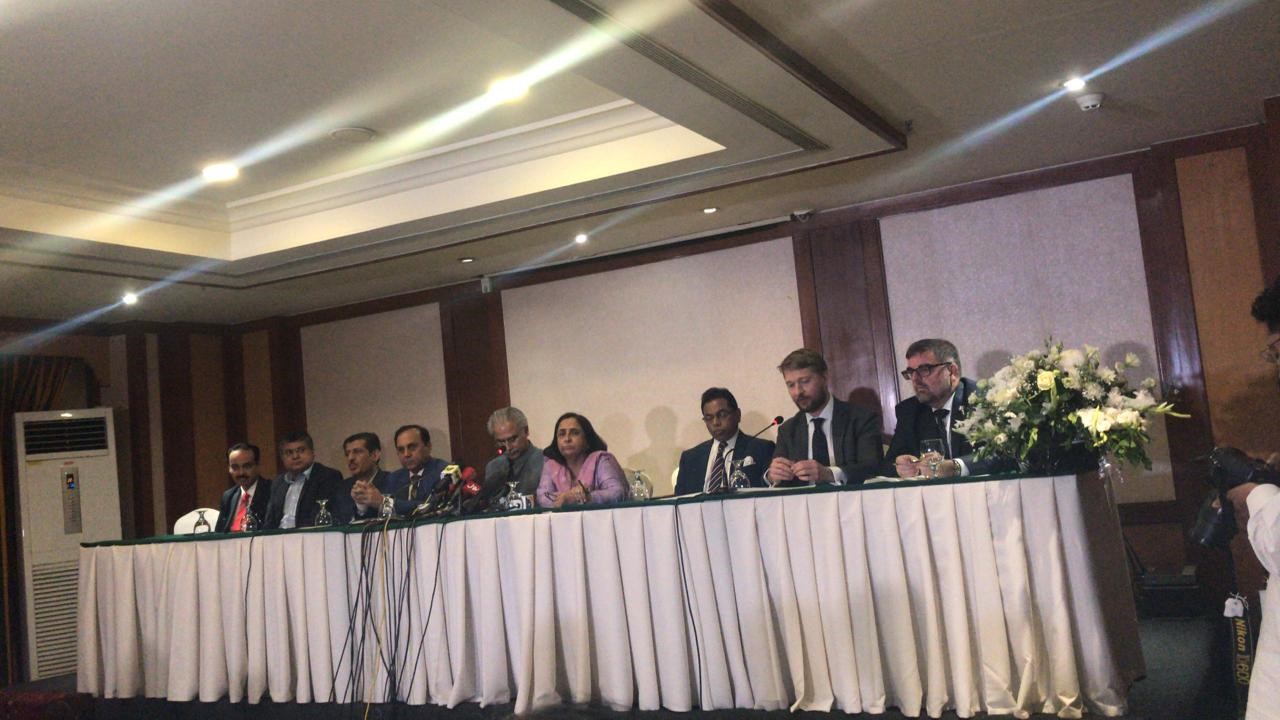 Bangkok/Karachi, 14 of June 2019 – UNAIDS Regional Director for Asia and the Pacific Eamonn Murphy went on an official visit to Pakistan, where he reiterated UNAIDS’ commitment to supporting provincial and federal authorities to respond to the HIV outbreak and strengthen the HIV response in the country.

“There is a huge amount of work that needs to be done to improve infection control and support the affected children and their families,” said UNAIDS Regional Director at a press conference held today in Karachi, to present the preliminary findings of an investigation to ascertain the sources of the HIV outbreak in Larkana District. “This work cannot be effectively carried out by the federal and provincial Governments alone. Civil society organizations, people living with and affected by HIV, private sector, religious leaders, media practitioners, development partners like the United Nations, everyone has a role to play. UNAIDS will continue to facilitate and coordinate within the UN System and other partners to ensure that the required support is provided effectively and efficiently”, added Mr. Murphy. END_OF_DOCUMENT_TOKEN_TO_BE_REPLACED

GENEVA, 16 May 2019—Ahead of the International Day against Homophobia, Transphobia and Biphobia (IDAHOT), on 17 May, UNAIDS is calling on all countries to remove discriminatory laws against lesbian, gay, bisexual, transgender and intersex (LGBTI) people.

Stigma towards key populations—gay men and other men who have sex with men, sex workers, transgender people, people who inject drugs and prisoners and other incarcerated people—is reinforced by criminal laws. These in turn fuel violence, exploitation and a climate of fear, hindering efforts to make HIV services available to the people who need them. END_OF_DOCUMENT_TOKEN_TO_BE_REPLACED

Bangkok, Thailand, 1 May 2019: United Nations Under-Secretary-General and UNAIDS Executive Director Michel Sidibé who was in Thailand on mission, visited Chulalongkorn Hospital, where her Royal Highness Princess Soamsawali of Thailand is being treated.

Mr. Sidibé, accompanied by UNAIDS Regional Director for Asia and the Pacific Mr. Eamonn Murphy, took a bouquet of flowers and paid tribute to Her Royal Highness Princess Soamsawali for her commitment to advocating for and expanding HIV prevention and bringing services closer to the people. “I would like to recognize all Princess Soamsawali has done and continues to do to prevent new HIV infections in Thailand and to reach the most vulnerable with HIV prevention services,” said Mr. Sidibé. END_OF_DOCUMENT_TOKEN_TO_BE_REPLACED

Bangkok, Thailand, 1 May 2019: A high-level event on ‘Advancing innovation in the HIV Response in Thailand and the Asia-Pacific Region’, was held yesterday to recognize the outstanding achievements of the Thai Red Cross AIDS Research Centre (TRC-ARC) in evidence-based innovation to Fast-Track the HIV response to end AIDS in Thailand and across the Asia and the Pacific Region.

Mr. Michel Sidibé, United Nations Under-Secretary-General and Executive Director of UNAIDS, presented a certificate of appreciation to Prof. Dr. Praphan Phanuphak, the TRC-ARC Director who diagnosed the first case of HIV in Thailand in 1985. “The Thai Red Cross AIDS Research Centre has played a leading role for more than 30 years in developing and promoting innovative and effective prevention and treatment approaches such as PMTCT, PrEP, Same-Day ART, and Key Population-Led Health Services. Its contribution expands beyond Thailand, being a catalyst for change for the Asia-Pacific region,” said Mr. Sidibé END_OF_DOCUMENT_TOKEN_TO_BE_REPLACED

Bangkok, Thailand, 8 April 2019 – It is with the deep sadness that UNAIDS Regional Office for Asia and the Pacific mourns the sudden death of Dean Lewis, a long-standing champion for HIV, Harm Reduction, TB and other health issues for the most marginalized in societies. He will be remembered as a strong voice and a change maker in the response to HIV and Tuberculosis and his continued support to break down stigma and discrimination.

UNAIDS Regional Director Eamonn Murphy said that the death of Dean Lewis is a huge loss to the people of India and all those who fight for social justice and access to health not only in India, but throughout the Asia Pacific region and globally. END_OF_DOCUMENT_TOKEN_TO_BE_REPLACED

Bangkok, Thailand, 29 January 2019 – UNAIDS joins the Ministry of Health of Singapore in condemning the illegal disclosure of confidential information of over 14 000 people living with HIV. UNAIDS welcomes the additional safeguards the Singaporean Ministry of Health has put in place against mishandling of information.

“The impact of a breach of data is potentially devastating for the affected individuals and their family and friends. UNAIDS will continue to call for stronger laws and policies to protect the right to health for all, including protection from stigma and discrimination, particularly for people living with and affected by HIV,” said Eamonn Murphy, UNAIDS Regional Director for Asia and the Pacific. END_OF_DOCUMENT_TOKEN_TO_BE_REPLACED

Bangkok/Manila, 11/01/2019: UNAIDS welcomes the signing by President Duterte of the new landmark HIV legislation, the Philippines HIV and AIDS Policy Act. The law provides a broad legislative framework for the response to HIV in the Philippines, giving the policy tools to reverse the growing HIV epidemic and creating a supportive environment for people living with and affected by HIV.

“With this new law, respect and dignity for people living with HIV and key populations prevail,” said Eamonn Murphy, UNAIDS regional director for Asia and the Pacific. “I applaud the tireless advocacy efforts of civil society and community groups, who have worked hand-in-hand with government particularly with Philippine National AIDS Council, and champions in the Philippine Congress to make this groundbreaking law a reality.” END_OF_DOCUMENT_TOKEN_TO_BE_REPLACED

As we mark the 30th anniversary of the first World AIDS Day, we acknowledge that the HIV response has moved from despair to hope over the last three decades. Since 1988, the HIV response has made significant progress and today, as a result of testing and treatment advances, millions of people living with HIV are leading healthy and productive lives.

The worst threat we have today in our response to the epidemic is complacency. Despite the availability of a widening array of effective HIV prevention tools and a massive scale-up of HIV treatment, new HIV infections have not decreased sufficiently in Asia and the Pacific. The annual number of new HIV infections has declined by 14% since 2010 but the region is falling short of the 2020 Fast-Track prevention target. END_OF_DOCUMENT_TOKEN_TO_BE_REPLACED