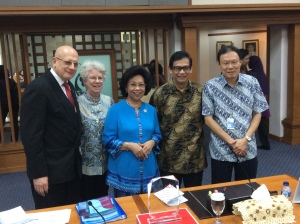 UNAIDS Regional Director Steve Kraus presented Indonesia’s Health Minister Dr. Nafsiah Mboi with an award for her governments efforts to scale up testing in the country, in a ceremony in Jakarta, Indonesia, on 5 August.

Indonesia has scaled up its treatment and testing programs, making them more widely available despite the challenges of a recent epidemic spread across a vast archipelagic nation.

Following the global release of the UNAIDS Gap Report and the AIDS 2014 conference in Melbourne, interest in Indonesia’s progress in combating HIV and AIDS greatly increased.

Mr. Kraus commended Indonesia for its achievements in expanding HIV testing across the country as well as for its regional leadership in effectively implementing and promoting harm reduction strategies. Indonesia was also applauded for being one of the first countries in Asia to rollout the strategic use of antiretroviral treatment (ARV).

Indonesia has committed to decentralizing access to HIV treatment and care by bringing HIV services closer to the community with a target of 475 primary care centers in 95 districts across the country.

Dr. Mboi elaborated on these points by providing a comprehensive overview of the evolution of Indonesia’s HIV and AIDS programme from 2006 to 2014, which included a chart depicting the dramatic decrease in the case fatality rate (from more than 11 percent in 2006 to less than one percent in 2014) – which clearly suggests that treatment is working for those who manage to access it.

Indonesia is just one of three countries in Southeast Asia, along with Cambodia and Thailand, that is actively scaling up HIV testing and treatment.

“Testing is the gateway to saving lives and Indonesia is seeing promising new rates in terms of testing, but there is still a need to extend these successes to harder to reach populations at higher risk to HIV.”
Steve Kraus, UNAIDS Regional Director, Asia Pacific

“We have made tremendous progress in the response to HIV in Indonesia, but we still need to ask ourselves what else needs to be done? How can we increase the pace of the response?”
Dr. Nafsiah Mboi, Health Minister of Indonesia