UNAIDS at the 2014 Youth Olympic Games 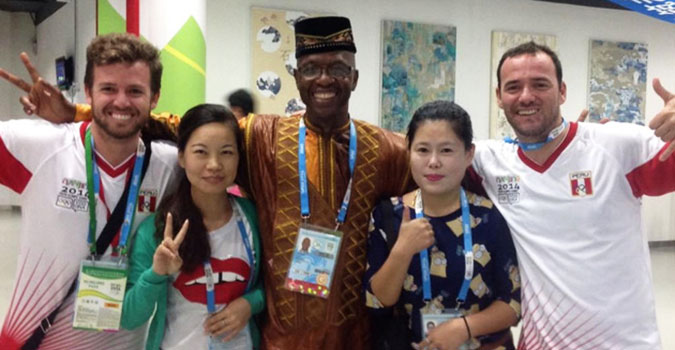 Athletes aged 15–18 have converged in Nanjing, China, to compete in a wide range of sports at the 2014 Youth Olympic Games. From 16 to 28 August, the young athletes will set their eyes on gold and on achieving their best performance. But the Olympic movement goes beyond celebrating physical talent: it values friendship, solidarity and fair play, and recognizes the power that sport can have in building a better world.

With thousands of young people participating in the global event and its cultural and educational programme, UNAIDS, the United Nations Office for South–South Cooperation and the Nanjing Medical University are showcasing ways in which public and private institutions can work together to create a healthier future for young people.

During a session with young athletes on 17 August, UNAIDS invited them to express their creativity at its educational booth in the Olympic Village as part of a campaign that features artwork, games and HIV facts. The Protect the Goal campaign, which uses the popularity and convening power of sport to mobilize youth for HIV prevention, was also promoted by UNAIDS at the event.

“The Olympic Games are not just about competition, but also about teaching values.”
Hamza Chraibi, Youth Ambassador from Morocco

“It is our common goal to reach out to as many young people as possible using sport as a powerful tool in the education and cultural programme on prevention of HIV across the globe.”
Djibril Diallo, Senior Adviser to the UNAIDS Executive Director

“It is my hope that today’s session will inspire new partnerships—among governments, researchers and health-care institutions—to promote better health and development around the world, helping to unleash the potential of developing countries to find transformative solutions.”
Teresa Liu, Chief, Development Solutions and Technology Exchange, United Nations Office for South–South Cooperation

Like Loading...
← UNAIDS recognizes Indonesia for scaling up HIV testing
Partnerships and linkages to HIV on agenda at small islands conference →