BEIJING, 27 April 2015—The Joint United Nations Programme on HIV/AIDS (UNAIDS) China Office has appointed the football champion, Shao Jiayi, as UNAIDS China National Goodwill Ambassador. The announcement was made at an exhibition game between the United Nations China Football team and the Capital Normal University Football team in Beijing. Mr Shao was the referee for the friendly match.

The footballer, who currently plays for Beijing Guoan in the Chinese Super League, has also had an extensive career in Germany, as well as represented his country at the FIFA World Cup and AFC Asian Cup tournaments. In his role as Goodwill Ambassador, Mr Shao will promote support for ending the AIDS epidemic by 2030 among the Chinese public, especially young people. He will encourage young men and women to become leaders in the response to AIDS and help end stigma and discrimination towards people living with HIV.

UNAIDS China Country Director Catherine Sozi said, “We are thrilled to have Shao Jiayi join the UNAIDS team as we know with his commitment and star power we can encourage young Chinese to learn the facts, become involved and help end the AIDS epidemic by 2030. He is such an inspirational voice against stigma and discrimination and a champion of people living with HIV.”

Mr Shao said, “Football is a powerful platform for engaging young people and raising their awareness of the importance of preventing HIV on the one hand, but also speaking out in support of everyone who faces stigma and discrimination.”

To mark World AIDS Day in December 2014, Mr. Shao attended an event in Beijing organized by UNAIDS as part of its Protect the Goal campaign, which garnered widespread attention from the media and young fans. The campaign uses the popularity and convening power of sport to raise awareness of HIV and drive young people to commit to HIV prevention.

Young people are particularly vulnerable to HIV. AIDS is the second leading cause of adolescent deaths worldwide. In China, 15.3% of people living with HIV are young people (aged 15-24 years). 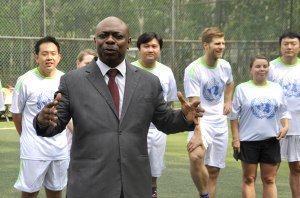 Like Loading...
← Tokyo ward is first to recognize same-sex couples in Japan
Chinese Premier commits to ending the AIDS epidemic in China →