A young man wearing a striped red T-shirt and faded blue jeans enters a popular bar in downtown Quezon City, the Philippines. He starts speaking to the owner and is soon joined by several other young men. It’s 10 p.m. and the group blends in seamlessly with the other bar customers. The young men are not here to relax, though. They are peer educators and health workers employed by Quezon City’s health department.

Outside, a street lamp casts an orange glow on a city ambulance that purrs softly, parked and waiting unobtrusively for clients. The group of men has come to conduct HIV counselling and testing with bar patrons and staff, who are mostly gay men or other men who have sex with men. On this steamy night they test around 50 people.

With nearly 3 million residents, Quezon City is the Philippines’ most populous urban centre and has made stopping a burgeoning AIDS epidemic a top priority. Mayor Herbert Bautista has encouraged city residents to know their HIV status and he has taken an HIV test in public. On 4 December, Mayor Bautista presided over a meeting with representatives from cities in the Metro Manila area on how to end AIDS by 2030.

“Quezon City is unrelenting in its effort to pursue and sustain its programme of zero new HIV infections, zero discrimination and zero AIDS-related deaths. We remain committed to providing preventive interventions, treatment, care and counselling to ensure our people receive a better quality of life,” said Mr Bautista.

UNAIDS has encouraged cities to accelerate their AIDS response by front-loading investments and reaching critical HIV prevention and treatment targets. In the Philippines, Quezon City is leading the push to implement the Fast-Track strategy in urban areas. In the meeting with his peers,  Mayor Bautista led the signing of the Metro Manila Mayors Compact, where city leaders agreed to adopt this approach.

Quezon City: A trailblazer in the country’s HIV response

While a network of facilities catering to the health needs of sex workers has existed since the 1990s in the Philippines, in 2012 Quezon City became the first city in the country to open a clinic providing services for men who have sex with men and transgender people.

Klinika Bernardo, popularly known as the Sundown Clinic, is located along a busy highway. It operates from 3 p.m. until 11 p.m., allowing a maximum number of clients to visit.

“We cater to men who have sex with men from all over the Philippines,” said Leonel John Ruiz, head physician at Klinika Bernardo. “Only 40% of our clients are from Quezon City.”

From the start, demand for services at the Sundown Clinic was high. Almost 250 HIV tests and pre- and post-test counselling services were conducted in its first two months of operation and 18 people tested HIV-positive. By the end of 2014, the clinic had conducted more than 2500 tests, of which a little more than 200 were HIV-positive. The first Sundown Clinic was so successful that the city opened a second one earlier this year. 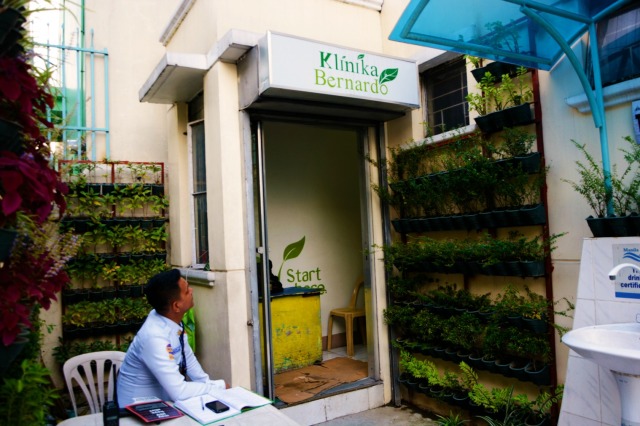 The Sundown Clinic: a safe space for men who have sex with men and transgender people. Credit: UNAIDS/D. Rivera

With its row of potted plants and bright green decor, Klinika Bernardo exudes a cheerful atmosphere. It has 10 staff members, with four peer educators, who include men who have sex with men and a transgender woman. Clients can choose the educator who best suits their needs. Instead of documenting and calling clients by their name, the clinic maintains their anonymity by giving each person a number.

“This is my first HIV test. I do not know what to expect,” said one young man while filling out registration forms. “I tried to read up on HIV so I would have some background information, but it took me awhile to gather the courage to come here. My partner came here with me, too, after hearing about it from our friend. We’re taking the test together.”

The young man found the staff supportive and skilled at easing his fears.

People who test HIV-positive receive counselling on antiretroviral medicines and are accompanied by staff through their initial months of HIV treatment, which is free in the Philippines.

From the start, demand for services at the Sundown Clinic was high. Almost 250 HIV tests and pre- and post-test counselling services were conducted in its first two months of operation and 18 people tested HIV positive. By the end of 2014, the clinic had conducted more than 2500 tests of which a little more than 200 were HIV positive. The first Sundown clinic was so successful that the city opened a second one earlier this year.

“My favourite part in working in Klinika Bernardo is that you get to meet a lot of people,” said Jayson, a peer educator. “And that you become friends, you get to know them, and you get to help them. That is the best part. Helping others help themselves.” 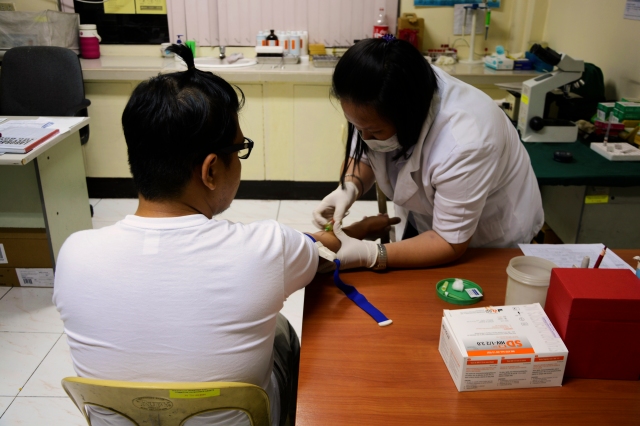 A person receiving an HIV test at the Sundown Clinic. Credit: UNAIDS/D. Rivera

Quezon city’s HIV programme becomes a model for other cities

Quezon City operates the Sundown clinics and has significantly increased investments in its HIV programmes in the past few years. And the city’s efforts to scale up HIV testing are getting results. The number of gay men and other men who have sex with men being tested almost quadrupled between 2011 and 2014.

“In the three years that we have been operating, the perspective has definitely changed,” says Mr Ruiz. “Before, we would have a hard time inviting people for testing. Now, most of our clients are walk-ins. People are personally and actively seeking information.”

Quezon City won the prestigious Galing Pook Award for outstanding local governance in 2014 for its pioneering HIV clinics. Several other local city governments are starting to adapt the Quezon City model and establish their own clinics.

While the Sundown Clinic staff are proud of their achievements, they are looking forward to closing shop one day.

“I pray before sleeping,” says Adel, the only female peer educator at Klinika Bernardo. “I pray that there would come a day when there will be no one in need of our services. That’s what I am working for.”