Meet the organization introducing PrEP to the Philippines

Asia is facing an unprecedented HIV epidemic among gay men and community health advocates are looking for innovative solutions on how to stop the virus from spreading. Chris Lagman is one of the founding members of LoveYourself, which is a lesbian, gay, bisexual, transgender (LGBT) community organization based in the Philippines. He is also the co-primary investigator of the PrEP Pilipinas project, which will officially introduce PrEP in the Philippines by 2017.

UNAIDS: Why do you think PrEP, as an additional prevention intervention, is needed in the Philippines?

Chris: We need more prevention interventions. More than 50% of  men who are having sex with men (MSM) (people) are not using condoms. We need more choices that will fit the lifestyle of MSMs.

We are focusing on ensuring that those who take PrEP would have the knowledge to access social and psychological support. They would be more aware about the risks that they are taking and look at PrEP as a way to empower themselves and make choices for themselves.

UNAIDS: Which communities in the Philippines do you think would benefit most from PrEP and why?

UNAIDS: What has been the reaction so far from community members regarding the use of PrEP?

Chris: In general, the activities that we’ve conducted introducing PrEP in the Philippines have received really positive feedback. We’ve had some informal comments especially from the people living with HIV community asking if the introduction of PrEP would affect the supply of antiretroviral medicine for people living with HIV. The answer is no, but these are valid questions.

I know of a group of people in Quezon City who sent me informal feedback when they discussed PrEP among HIV workers and volunteers. They got some “not so good” feedback, very moralistic judgments and stigma around using PrEP. I would be very interested in knowing more about their responses.

UNAIDS: Can you tell us about the progress the Philippines has made so far in introducing PrEP to the Filipino people?

Chris: We started working on this more than a year ago. We have funding coming from AMFar and that has been approved since October. We are almost about to launch. We will officially announce the introduction of the programme this November, but the actual enrollment will happen January or February next year.

We have started the procurement process for tenofovir/emtricitabine PrEP; a generic version of Truvada produced by Mylan India, which is a registered producer. We are expecting delivery before the end of the year, sometime in December.

We have written up the protocol on how to introduce and monitor those who will join the program. We identified two hundred participants initially and funded that. 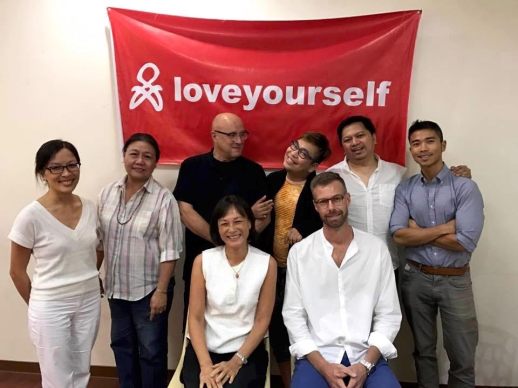 UNAIDS: Can you tell us the plan of LoveYourself with PrEP Pilipinas?

Chris: PrEP Pilipinas a small demonstration project. It will be in Metro Manila, it will be in the two LoveYourself clinics. We’re using LoveYourself to help with the marketing, with information and education. We are also using their facilities to provide PrEP. We will not just distribute PrEP; it will be a service. It will also include check-ups, risk reduction counseling, adherence counseling and so on.

We will embed the PrEP education in the HIV testing process. So all those that are going through the HIV testing in LoveYourself clinics, which is about 60-100 a day, will be given PrEP information. So if they are in the criteria of that we have set in the protocol they will be invited to consider if they want to access PrEP.

As far as branding, it is a LoveYourself project together with the DOH (Department of Health), and with all the other supporters AmFAR and WHO.

UNAIDS: What impact or outcomes are you hoping for with the inclusion of PreP as a preventive measure in the Philippines?

Chris: For the PrEP Pilipinas project, we would really like to learn more about the reception by the community. By doing that in the next year, we would like to learn how we could scale this up to more than just LoveYourself, to other NGOs and communities around the Philippines – with what works, and what doesn’t work. That is the primary goal of PrEP Pilipinas.